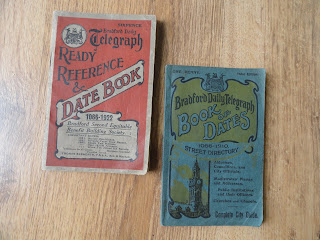 I was very excited to opens today’s post I had been expecting copies of the Bradford Daily Telegraph Date books from 1910 and 1922. I was slightly surprised by their size I had expected them to be A4 for some reason.
I wasn’t exactly sure of their contents but thought they would be useful for my Bradford research and they were so much better than my expectations. They contain amongst other things:

But perhaps most interestingly of all notable events in Bradford from 1066 to 1922 there are some interesting and unusual entries and I am looking forward to sharing more with you on my blog and by twitter. Relevant items will also be added to the timeline as that develops but here is a taster for now
1066 – The value of the Manor of Bradford prior to the Conquest was £4 the population of the then Bradford being only 250
1822 – An Act passed that all oil lamps in the streets of Bradford should make way for gas
1876 Dec 4 – Shipley and Guiseley railway opened
1888 Dec 29 – Mysterious murder of a boy in Manningham
1913 Feb 7 – Gale in Bradford; electric tramcar blown over at Allerton