Following on from my previous posts about Bradford Royal Infirmary’s (BRI’s) Nurses League I found a great website about British Military Nurses - http://www.scarletfinders.co.uk 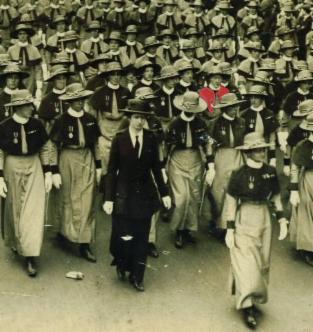 It contains background information on military nurses from Queen Alexandra's Imperial Military Nursing Service and Territorial Force Nursing Service to civilian nurses. There are accounts of nurse’s experiences during the Great War overseas and at home. Military Medals are described along with the names of some of the nurses that were awarded them. Interesting there is official war diary of the Matron-in-Chief, of the British Expeditionary Force France and Flanders.
I have been sharing the information I have been gathering about Bradford’s WW1 hospitals as the site lists UK war hospitals in 1917 and in return she has shared information about nurses from Bradford who joined the 'regular' Queen Alexandra's Imperial Military Nursing Service (not the reserve). This prompted me to go back and look again at the Nurses League Records to see if I could identify which nurses who trained at the BRI were military nurses more on that later this week.
There are also guides to finding medical records and researching a nurse.
You can find out more by reading the related blog by the same person called “This Intrepid Band”about nurses in the Great War or by following @scarletfinders